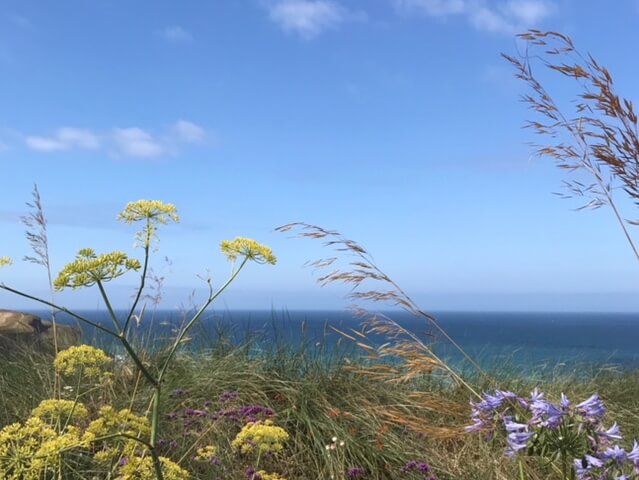 Not a week seems to go by without another piece of research saying country folk have it better than city dwellers in terms of their physical and mental wellbeing.

There is no doubt that being nature has its benefits, and I can’t deny that we had the most wonderful fortnight in Cornwall this year, enjoying all that Mother Nature has to offer (as evidenced in the photograph above).

But where does that leave us city-dwellers? Those of us who either have to live in a city for work or choose to because we like it here?

In reality the evidence is surprisingly scant and not as clear-cut as you might think.

Researchers at Exeter University recently revealed that a seemingly countless number of different factors determine how our surroundings influence us.

Of course we instinctively know that spending time in nature is generally good for us.

Apparently those who have sea views are even luckier: Residents who live by a vast expanse of water claim to feel less stressed than land-locked urbanites. Perhaps that explains why so many of us flock to the sea as soon as the sun makes an appearance.

But while I love green space – and indeed ocean views (who doesn’t?) – I also thrive on the culture, convenience and sheer vibrancy of life that the city in which I live (the amazing Bristol) has to offer.

It’s not all bad news for city dwellers. We tend to be more active – and therefore less obese – than our country cousins and are more socially engaged (perhaps through necessity) with one another. And we generally lead happier lives as seniors, living longer and with a reduced risk of suicide.

So how to get the best of both worlds? Living in the city but enjoying the benefits that Mother Nature has to offer?

Not so long ago, new research confirmed that contact with nature is good for your mental health and wellbeing. No surprises there.

We all know that some fresh air can clear your head and give you a sense of wellbeing. Being outside in greenery is directly linked to reduced physical markers of stress – even just sitting beneath a tree can lower both our heart rate and blood pressure. Physiologically it can lower our cortisol levels and is known to reduce depression and anxiety.

Conducted by King’s College London this new research used a specially developed smartphone app called Urban Mind. It examined how the mental wellbeing of those who live and more specifically work in cities is affected by exposure to different elements of the natural world.

Results confirmed that people’s moods improved just by being outdoors, but the further news was that effects did not dissipate once subjects had returned to their desks. And after exposure to trees, sky and birdsong, the benefits were more long-lasting – sometimes for up to several hours.

Despite the many benefits of urban living, city dwellers are at higher risk of developing mental illness. Living and working in a city and having to constantly attend to traffic, technology and other stimuli on a daily basis can cause a sensory overload, resulting in a neurological state that researchers call “directed attention fatigue”. It’s distraction on another level altogether.

For office workers, getting outside at lunchtime and simply sitting in the park looking at trees and the sky and listening to birdsong connects into a more primal part of the brain and gives it a break from all the urban stimuli.

Getting your daily dose of nature doesn’t have to be difficult. You can:

Even a desk by the window for some natural light is beneficial, and a recent report found that office workers with just views of trees had lower stress levels than those who looked across a city.

It’s back to the yoga mat next week, I promise. But if you’ll excuse me right now I’m off to walk the dog. And I’ll take a look at the trees and the sky while I’m at it.

Take a break. All you need to do is look up.

Are you a country mouse or a town mouse? If the latter, how do you choose to get your daily dose of Mother Nature?