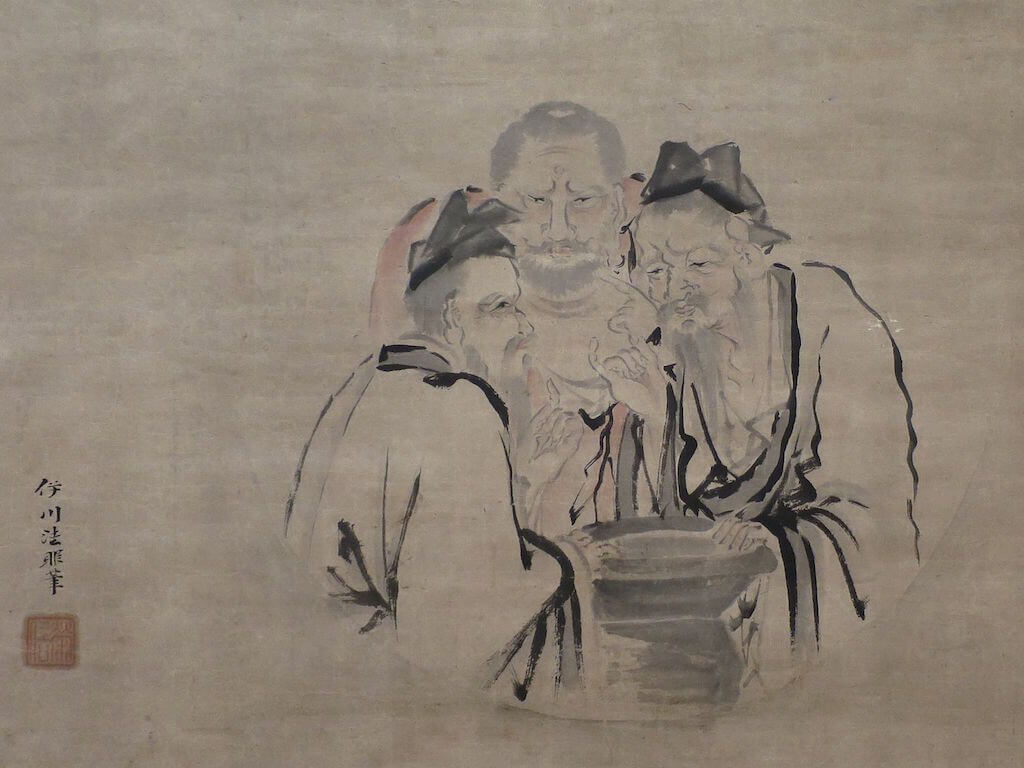 Last week’s post on gratitude prompted much conversation and debate (both online and in person) which was thrilling. One of my more cultured friends referenced a Chinese print called “The Vinegar Tasters” and I had to confess I hadn’t heard of it (oh the shame; me a former history of art student as well). So I thought I’d look it up.

Ready to dabble in Eastern art and philosophy?

The first thing I discovered is that it is not one single image.

The Vinegar Tasters is a traditional subject in Chinese art; conduct a quick Google search and you’ll find endless different interpretations of the same theme.

Three old men surround a vat of vinegar and have dipped their fingers in to taste it. The first pulls a scowl, the second wears a frown but the third man is smiling. The three men are Confucius, Buddha and Lao-Tse, representing the “Three Teachings” of ancient Chinese philosophy.

Confucius’ ideas dealt primarily with moral conduct and are often categorised as a system for ethical living. His work and sayings were later collected in a book known The Analects. It’s full of brilliant quotes, including the very contemporary: “Choose a job you love and you will never work a day in your life.” Which is not bad advice from someone writing 2,500 years ago.

Why the scowl? During his lifetime Confucius thought society immoral and full of degenerates – and disapproved wholeheartedly. He thought rules would sort them out and boy did he compile a list: rules for respecting your elders, rules for governors, rules for mourning, rules for ceremonies, rules for drinking tea.

You name it, Confucius probably has a rule for it.

Most people know that Buddha was born a prince and sheltered from the harsher realities of existence (old age, sickness and death) for the first 30 or so years of his life. Life was great.

But venturing beyond the confines of his palace walls, he discovered that life was instead full of suffering, dissatisfaction and pain. Hence the face.

When we westerners think of Buddha these days we might imagine someone wearing a more serene countenance. Not here. Buddha’s path to that serene face (of enlightenment) required a lifetime of wisdom, ethical conduct and mental discipline that eventually freed him from the emotional attachments and human desires that cause the suffering inherent in our lives.

And so we come to Lao-Tse, the one I knew least about.

Lao-Tse was the writer of the Tao Te Ching and the founding father of Taoism which offers us The Tao or The Way.

I read that The Tao is undefinable but also that each person can discover the Tao on their own terms. Was that helpful, I wondered?

Taoism is a system of beliefs set towards the service of one’s true nature. The path of understanding Taoism is acceptance, to go with the flow. Don’t try to resolve contradictions in your life; we are each a blend of many, sometimes conflicting, truths. “When I let go of who I am, I become what I might be,” wrote Lao-Tse. As I said, go with the flow.

When Lao-Tse tastes the vinegar he is smiling because he accepts that the vinegar tastes exactly as it should.

My favourite interpretation of this allegory is that since the three men are gathered around a single vat of vinegar, the vinegar represents life. The point is not about how the vinegar tastes; no-one likes the taste of vinegar. The point is about how various belief systems approach the idea of unpleasant events that inevitably occur in life.

These days, more than two Millenia on from Confucius, Buddha and Lao-Tse, in our predominantly secular and (thank goodness) tolerant societies, it is perfectly acceptable not to have a faith or belief system.

But is it useful?

We all need systems to help us make sense of and operate in the world around us and deal with those difficult events (the vinegar). How are we expected to anchor ourselves morally, ethically, socially, without adhering to any particular belief system? Confucius said: “To throw yourself into strange teachings is quite dangerous.” But I disagree. Perhaps we can throw ourselves into these “strange teachings”, take inspiration from all three vinegar tasters and find our unique way. But then, does that lead us straight back to The Tao?!

The friend who mentioned The Vinegar Tasters also asked whether I was a Buddhist. I confessed I was not. Was I a vegetarian? Again, the answer came in the negative.

But just as you do not need to be a vegetarian to enjoy vegetarian food, I don’t think you need to align yourself with any particular belief system to appreciate and benefit from anything it may have to offer. It may seem like selective cultural (mis)appropriation but, if it works for you and makes you happier in your life and your soul, are there any good reasons for not doing so?

How do you orientate yourself in this world? I’m struggling with this “pick ‘n’mix” approach. What do you think? Is it acceptable? Can it truly work on an individual basis?