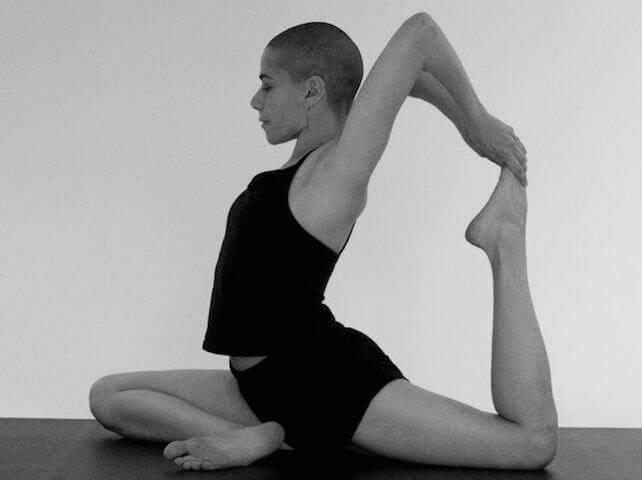 If ever more proof of yoga’s anti-ageing powers was needed then look no further.

Scaravelli-influenced teacher Christine Borg recently posted this remarkable video to celebrate her half-century. It’s truly hard to reconcile what you see before you with the age she claims to be. Watching it, I am reminded of a young Sigourney Weaver in Alien – although the shapes Christine makes with her body sometimes seem more Alien than they do Ripley. I’m pretty sure Christine doesn’t practice yoga in order to look youthful; her teachings emphasise “playing” within poses, and that sense of joy and wonder is palpable in this video. And as we all know, a sense of fun is key to staying young. Perhaps the knock on effect is also looking young.

It’s astonishing to think that Christine took her first yoga class less than two decades ago. Now an inspiring yoga teacher with a devoted following she travels the world to pass on to others what her Scaravelli-influenced practice – and her own teacher, Vanda Scaravelli’s direct student Diane Long – have taught her.

Vanda herself only took up yoga when she was in her late forties. She was a classically trained concert pianist with scoliosis and an unlikely yoga student. Introduced to BKS Iyengar during a difficult and emotional time in her life (just after the sudden death of her husband) she continued to study with him over the course of several summers before developing her own style of yoga and accepting students of her own. “In nature” she wrote, “flowers bloom in the spring and then again in autumn. This is what I felt was happening to me.”

Watching this video gives me hope that as we progress from our youth into our middle and even our latter age, it needn’t be plagued by stiff joints and aching backs. This is inspiration that, with care and attention, our middle years can instead be a wonderful reacquaintance with and rejuvenation within our bodies.

After more than a decade of looking after others rather than myself, I am looking forward to that.