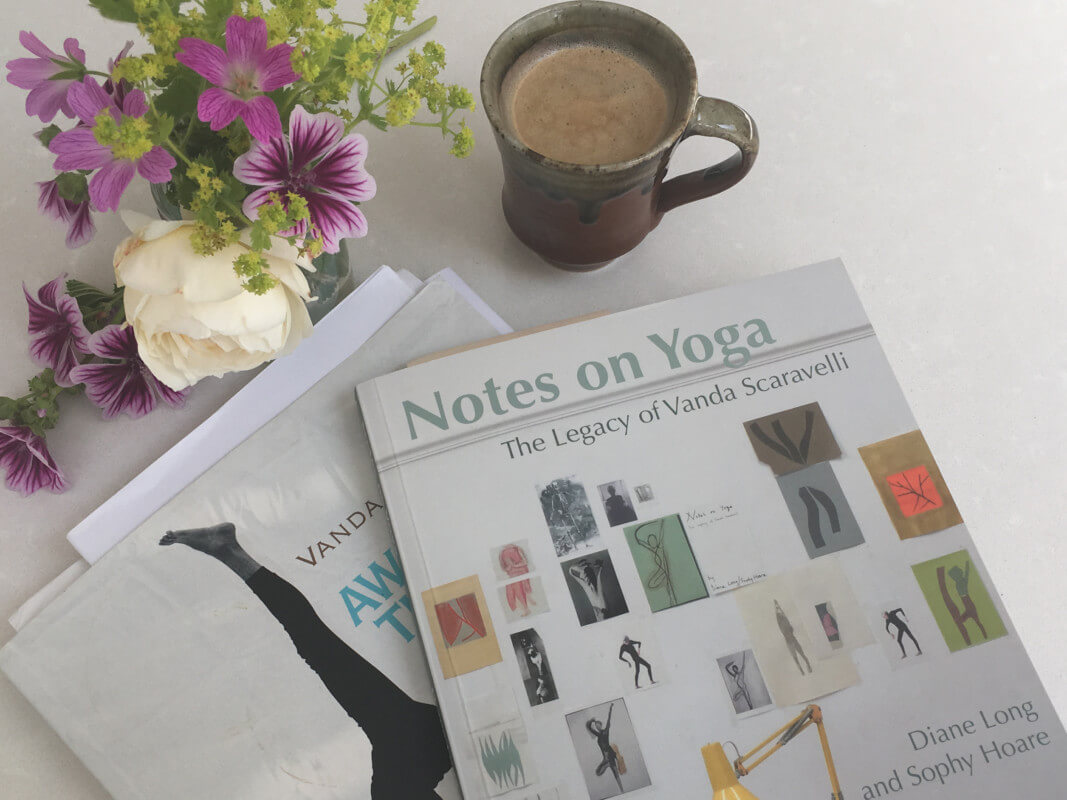 Notes on Yoga: The Legacy of Vanda Scaravelli

Review of Notes on Yoga

I stumbled upon Scaravelli Yoga around the same time in my (mid) life that Vanda Scaravelli herself came to yoga. Now a new book, Notes on Yoga by Diane Long and Sophy Hoare, offers new insight into what some people regard as an esoteric and enigmatic form of yoga.

Vanda Scaravelli was in her late forties when she was introduced to BKS Iyengar and TKV Desikachar and studied intensively with them over several summers at her home in Italy before developing her own unique practice. It was years before she accepted a handful of students.

Rather than “doing” yoga, Vanda Scaravelli believed in “undoing” tension and habits in the body. In her own way she undid yoga itself. When teaching she often used natural imagery – likening her style of effortless practice to birds or flowers, trees and waterfalls. Vanda’s own book, Awakening the Spine, inspires through philosophy and images and even when describing asanas in detail is often more poetic than precise – for downward dog she suggests imagining galloping like a horse. As such, her approach can seem esoteric and impenetrable.

Which is why this book, by two of Vanda’s long-term students Diane Long and Sophy Hoare, has been so welcomed by those interested in her teachings. Thus far, Vanda’s legacy has continued through her one book and the teachings of her few students and her students’ students. Long and Hoare both studied with Vanda herself over many years and so could not be better placed to explain her methods. Notes on Yoga is the first book aiming to explain Scaravelli’s approach in full, although they warn that students can initially feel “disorientated” and that the practice is “full of contradictions, often mystifying”.

Beautifully assembled and with black and white images of Diane and Sophy practising together, this book is divided into sections that attempt to cover the breadth of Vanda’s teachings. Written both collaboratively and individually, the book moves between personal experience and as clear an explanation as possible of Vanda’s approach and how it applies to practice.

Despite being a pupil of Iyengar’s, Scaravelli’s approach often seems the polar opposite of his. She dismissed “correct alignment” and did not believe in “stretching” – surely two of the most common things found in a yoga class. Long and Hoare address these assumptions – and others – about what might constitute practice. “Animals and the rest of nature are not concerned with alignment. Why restrict the body?” they ask. “The concept of stretching is superficial and linear,” they state. Not only is this revolutionary within the world of yoga, this exploratory practice of “undoing”, where “asanas are not goals but frameworks for finding connections in the body”, is an anathema in a society driven by targets, goals and achievements.

As helpful (or counter intuitive, depending on the type of yoga you enjoy) as these instructions are, it is Long and Hoare’s own experiences of being taught yoga by Vanda that are perhaps the most enlightening. For Hoare, the practice was so different to what she had previously experienced, “the new could not be grafted onto the old; and I began to realise the two could not be merged.” One of the things she loves about this style is that “there are no rules, no authority outside the practice itself.”

Scaravelli yoga is primarily an experiential practice, best taught through personal exploration and the hands-on guidance of a good teacher. It is hard to elucidate through words: in this book “The Limitations of Language” gets a chapter all to itself. “Words are clues, hints, indications; they cannot give an exact representation of what is happening inside the body,” Long and Hoare write. “It is up to us to interpret, to find out what really lies behind the words.” And that, if ever there was one, is a cue to roll out your yoga mat and get practising.