A Lesson in Karma 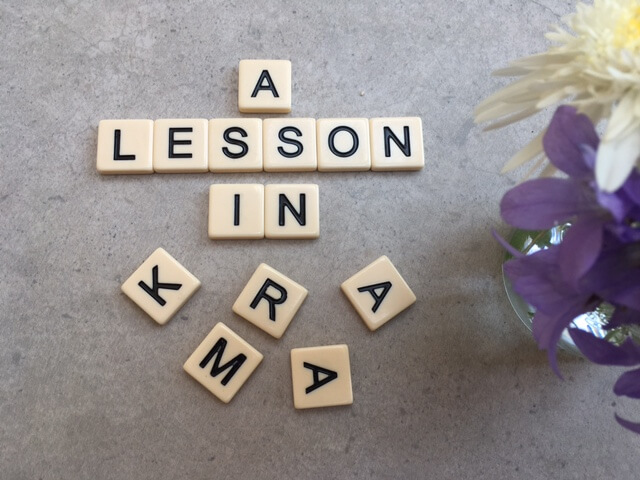 Today my plans for yoga were completely derailed. Having already rescheduled a lesson once due to taking Wannabe junior to Fracture Clinic on account of him selfishly breaking his arm, I was thrilled to have been able to set another date with my lovely teacher (I’m lucky if I see her twice a year). I’d spent most of yesterday on a coach for a school trip and my back was aching. I couldn’t wait and I was all set. My son, however, had other ideas.

At 8am I heard the wail of a child with a headache. Administering Calpol and bundling the poor kid into the car I was determined it would clear by the time we got to the school gates. Instead, he was in tears. I tried (and failed) not to be cross. Yoga plans dashed I sent an apologetic text to my teacher and set off back home. Just by the Waitrose roundabout Wannabe junior was sick. It wasn’t even 8.40 and already my day (not to mention the car upholstery) was ruined. I tried (and failed again) not to be cross. And what about my back!?

As I cleared up the vomit in my car this definitely felt like a lesson in karma. But it got me wondering – what does karma really mean?

Most of us understand that karma is the belief that actions are part of a cycle of cause and effect. But it is a bit more complicated that that.

According to the Hindu treatise on yoga, the Bhagavad Gita, karma means action. It asks us to perform actions with the right feeling and attitude of non-attachment to the outcome. The more one acts with the hope of rewards, the more one is liable to disappointment or frustration.

Being so attached to my yoga lesson meant its cancellation definitely had an adverse effect on me. If good deeds lead to positive benefits and bad deeds result in negative consequences, my having to clear up this vomit was a result of being so cross at having to cancel my lesson.

But as I cleaned my car my anger dissipated. No point crying over spilt milk – or sick – as they say. This was just something I had to do. The Bhagavad Gita instructs us that it is through performing our actions that we do our duty and sustain ourselves, our society and the wider world.

As it was I was forced to spend the day at home. I didn’t get round to practising any asanas but instead looked after my son, prepared dinner and tended the plants, indoors and out. I worked though some of my “to do” list. I did some chores I’d been putting off for a while. And I wrote this post. Miraculously, my back pain eased off – and in fact was probably better for not having driven the hour plus it takes to see my teacher. This was karma.

So what did I learn? Yoga doesn’t have to involve asanas or meditation or be practised in a studio. It is the things life throws at you and your personal interpretation of it that is one’s best guide. Oh – and always have an emergency plastic bag in the car.