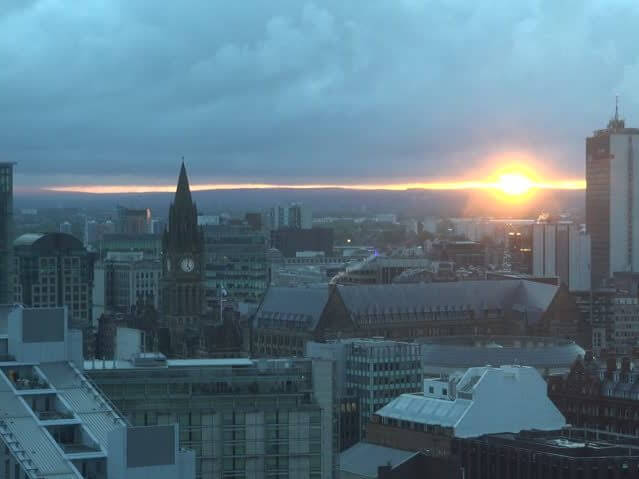 It seems a strange time to be writing my first post for this new yoga blog. I spent a decade of my life in Manchester, the Wannabe husband 25 years. We have old friends there. Our children were born a few miles from where the bomb exploded. How can an inconsequential yoga blog make a difference after the atrocities at the Arena there this week?

Obviously it can’t. But yoga – and in the practice of thinking about how to lead a better life through its values – has sustained me through dark times (many of them, it has to be said, in Manchester – where the community is strong but the rain is incessant and I suffered bouts of depression there. But I digress.)

For most us, yoga gives us strength, stability and ease in our bodies and, if we are lucky enough, also our minds. A few hours a week when we have nothing to worry about except our bodies on the mat and our minds focussed on our asana or – in meditation – nothing at all. It’s an escape, and that can be a very appealing strategy.

But yoga can also encourage us to think about our place in the wider world. It might seem that this is becoming too terrifying a place to engage with and that escape is the most attractive option, but the fact is we are social creatures. We are all members of a family, community and a society, and it is how we relate to all of these that can make a difference. As well as escape, yoga can offer a more proactive form of dealing with life’s vicissitudes.

Patanjali outlined the eight limbs of yoga in the Yoga Sutras. At the beginning of this eight-fold path of yoga lie the Yamas: the moral, ethical and social guidelines by which the practising yogi aspires to lead his or her life. Ahimsa – the practice of non-violence in actions, words and thoughts towards others and oneself – is one of these and it has never seemed more relevant than it does today.

Violent responses are created most often in our reaction to events and others, especially when we judge or criticise. It might be simple things: irritation that the bus is late, feeling annoyed your partner forgot to pick up some milk, a friend letting you down.

Surely feeling anger and a desire for retribution after this week’s events would be the most natural thing in world? But – and forgive my mixing religious metaphors here – it seems just as senseless to go down the eye for an eye route. Ahimsa, rightly understood, is the ultimate weapon. Through compassion and the rejection of violence the possibility of further conflict is banished. Rejecting violence and practising Ahimsa can liberate us all from hatred.

Clearly terrorists do not practise Ahimsa. Terrorism is abhorrent and terrorists pile unspeakable horror upon horror. The world is not a fair place and it is easy to rail against injustice and practising Ahimsa is hard and frustrating – often it does not come naturally. Events in Manchester have been the most extreme test for this kind of practice. After such horrors it is often said that it is important to remember that there is more good than evil in this world. But clearly there’s still not enough.

People struggle to understand what difference they can make alone but it is important to realise that together we can create a meaningful force for good. The more people who practise yoga – and Ahimsa specifically – surely the better a place our world can be.